Ladies interested in participating in the season Divisions 2 and 3 joint Lawndale/Friendly teams can join at any time. For days and times to try out a clinic and meet the team contact Beth or Brian. 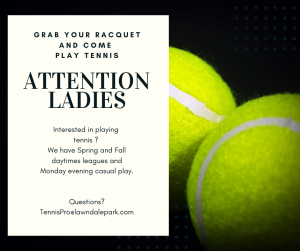 Congratulations to the Lawndale/Friendly Division 3 team for taking first place for the fall season! The final match was held on October 29th.

Standings and stats may be viewed here.

Lawndale’s Breakfast at Wimbledon was Held on July 13th

Eight men and eight women filled the draw. Play was followed by traditional English fare of strawberries and cream, cucumber sandwiches, and champagne.

The Lawndale Singles Championship Finals Wrapped Up on June 23rd

Thanks to everyone that supported and participated in our club singles championships. Both of our finals were tremendous:
Jill defeats Sayaka 3-6, 6-3, 10-4
Preston defeats Alan 6-3, 5-7, 10-6
Check out the full bracket here.
Congratulations to our new club champions, Jill Perez and Preston Thomas!

Are you hearing from us?

Lawndale Swim & Tennis Club sends out a lot of information via e-mail to our members. If you aren’t hearing from us send an e-mail to us at [email protected] and let us know.